The Psychological Impact Of Yard-Sign Color On Potential Voters

Signs supporting current and future government officials are once again beginning to pop up in the yards of fervent supporters and public businesses. If you are running for office, you’re probably taking advantage of this campaigning tool as well! Have you ever wondered just how much of an impact color can have on the effectiveness of these yard signs?

Probably not—at least not consciously. Unless the colors on these yard signs are outrageous, or obviously patriotic, you probably haven’t spent a second even considering the colors. But as it turns out, the psychological impact of yard-sign color on potential voters is undeniable—and subtle.

Advertisers across all industries have long studied and utilized the potential impact of color on audiences, so it should be no surprise that politicians are following suit.

According to marketing and psychology research, each color evokes a different emotion in the audience’s mind, from feelings of excitement and power when they see the color red, to optimism when they see the color yellow. And because political elections often make appeals to emotional sensibilities, it’s time to consider color as an important choice in your election campaign, as well.

On a national level, this conscious emphasis on color has been happening for a while now. You only have to turn on a primary-election debate to see a plethora of blue suits seeking to evoke trustworthiness, with red accent colors woven in generously, and evoking power. Digital-media professor Kristen Palana discusses the importance of color in positioning national candidates more in this article. 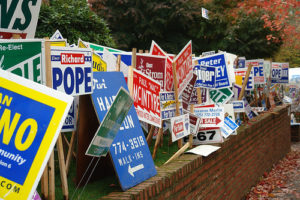 These trends translate directly to local political campaigns, as well. While local candidates may not think as much about their choice of tie as their national equivalents, they should absolutely consider color when designing attention-grabbing campaign materials, such as yard signs, to subtly remind their audience of what they stand for. Here’s what that might look like:

Most likely, many of the candidates in your district will decide to go with a red, white, and blue color palette. Not only do those colors communicate patriotism, they also seek to evoke the same emotions that national candidates do: power and trust.

Of course, going with the exact same color palette as your competitors will do little to raise attention for your political campaign amongst the noise of countless other similar-looking yard signs. This leaves you with two choices:

Especially in conservative districts, you may simply not be able to afford going beyond the red, white, and blue spectrum. Put simply, patriotism matters in all elections, and the undoubted psychological connotations of red (passion and power) and blue (trustworthiness and competence) mean that most of your less color-savvy competitors will trust these colors to do the job. 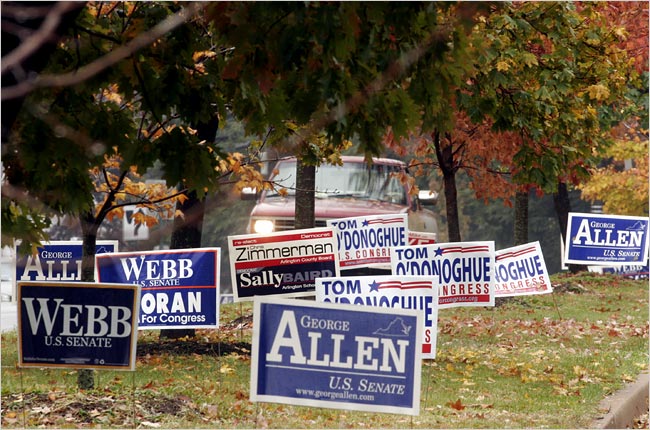 But even if you stay within this spectrum, you have opportunities to stand out. Consider emphasizing an original arrangement of these colors, such as white on a blue or red background. Without changing the actual colors, you can still ensure that your signs will receive more attention than your competitors’ more traditional layouts.

For yard signs, standing out from the crowd and getting attention is absolutely key, so feel free to be creative with the limited colors available. Ideally, however, you can choose the second option:

Don’t be hesitant to be different when it comes to yard signs, and go against the grain. For example, black is among one of the most attention-grabbing colors for yard signs, because they are typically brightly colored. A yard sign that utilizes black can make passersby look twice.

At the same time, few politicians actually use black, fearing negative connotations that don’t actually exist. In fact, black conveys authority and is among the favorite colors of both males and females, making it a good and original choice for your campaign, when used in moderation. No one wants to see an all-black sign, but it can be used to great effect when paired with other colors.

Orange is another option you might want to pursue as a color choice. Like black, it is not widely-used among politicians, yet it conveys optimism, clarity, and warmth—perfect for a candidate who is not yet personally known among local constituents.

Orange works best as a background for yard signs; using it as text means running the risk of blending in with the bright colors of the outdoors and decreasing visibility. And beware: you do not want to use orange before and during Halloween. Otherwise, you risk being subconsciously sorted away as a seasonal candidate who will matter little once the spooky season is over.

The Central Importance Of Color In Politics

The reality is quite simple: color and its psychological impact matters in politics. It’s not a coincidence that Americans fall back on colors even to describe the leanings of political districts as either red or blue. Is your campaign taking as much advantage of the psychological impact of color as it could?

Answering this question is especially important for yard signs. Throughout this post, we’ve emphasized how important it is for yard signs to capture your audience’s attention. Your constituents will drive past them in the blink of an eye, and often won’t have much time to read the actual wording on the sign.

What’s more, in most cases, you won’t even have much space beyond your name! But with a strategic use of color, you can ensure that your yard signs not only capture your audience’s attention, but also convey a message about your character without needing a single word. That’s the psychological impact of color—both for yard signs and elsewhere in your political campaign.

Grab Attention for Your Next Political Campaign